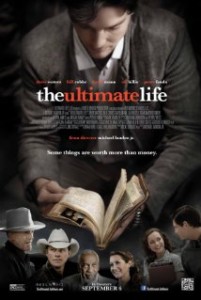 which includes managing a Billion dollar foundation is being challenged by his own family. In a courtroom battle…his assets

truly means to fulfill his destiny…And Live.
Michael Landon Jr., who helmed The Last Sin Eater, takes over the director’s chair for what’s being promoted as both a

sequel and a prequel to The Ultimate Gift. Making things slightly more confusing is the fact that the principal cast has

returned, but Logan Bartholomew has taken over the lead role of Jason Stevens. In a week with only one other wide release

(Riddick), the Faith-based audience could help this one land in the top 10.